The Udupi diocesan dream project ‘Anugraha’ the Pastoral Centre’s Inauguration and Blessing was held at Kukkunje near Santhekatte on 13th January 2022. 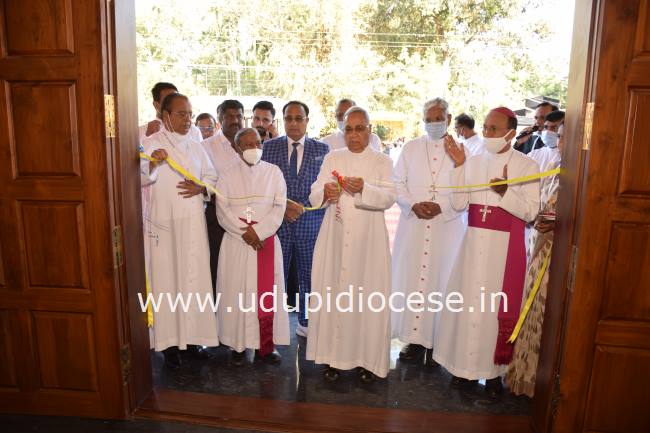 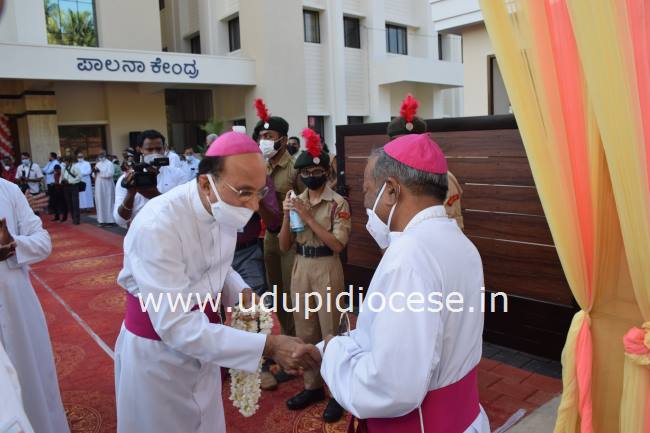 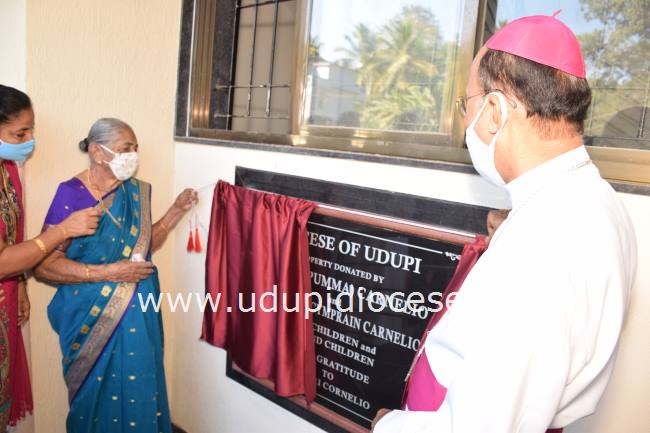 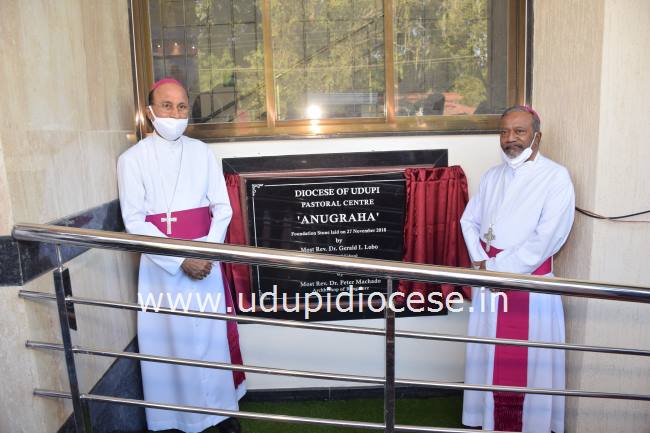 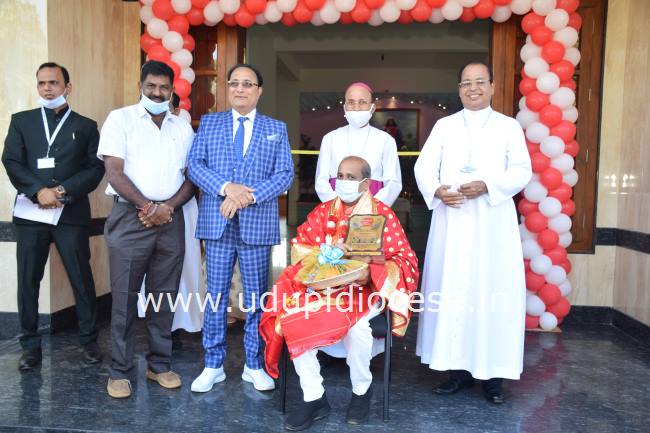 Speaking on this occasion, MLA of Udupi Raghupati Bhat said that he considered himself fortunate that while the new Diocese of Udupi was being formed ten years ago as well as when the new Pastoral Centre is being inaugurated he was the MLA on both occasions and could take part in both these programmes. He further said that the Christian community has been at the forefront in both Udupi and Mangalore Districts in the field of education and healthcare. The Pastoral Centre was a long pending dream of the Udupi Diocese and through this centre, the Christian community will render greater service in the District.

Bishop of Udupi, Dr Gerald Isaac Lobo felicitated Raghupati Bhat for his support and cooperation in the construction of the Pastoral Centre and for helping in getting the necessary clearances from the government institutions. 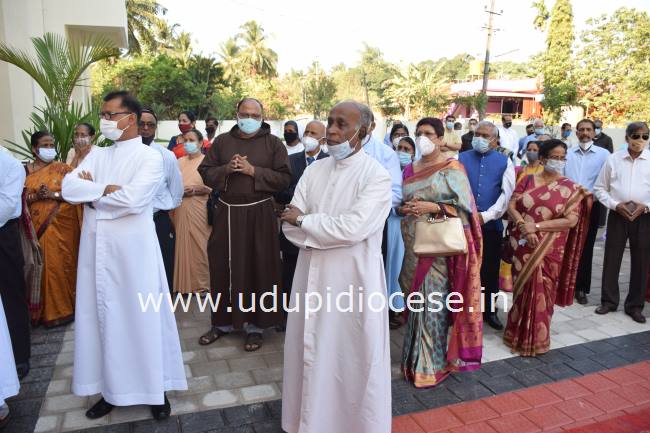 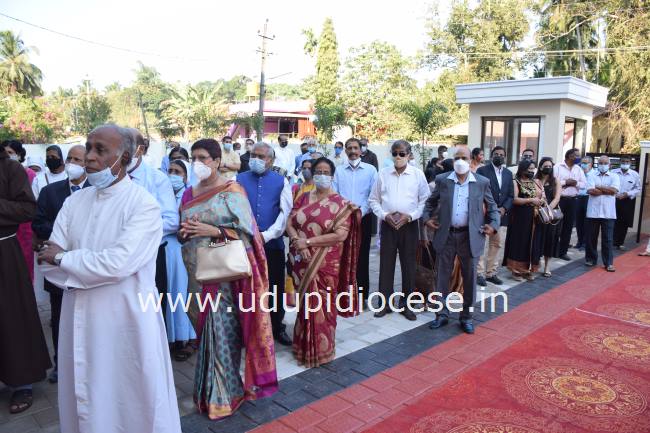 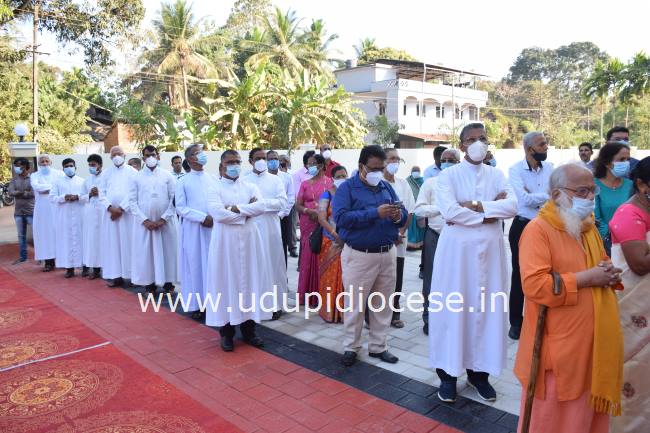 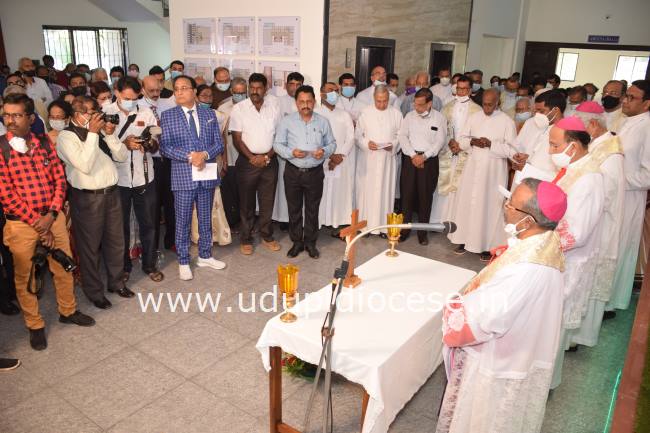 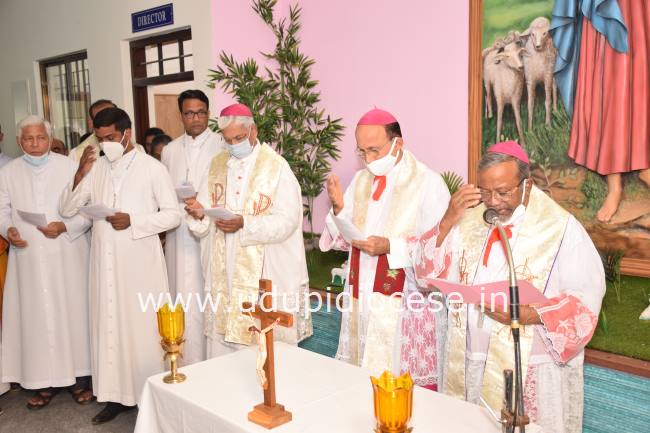 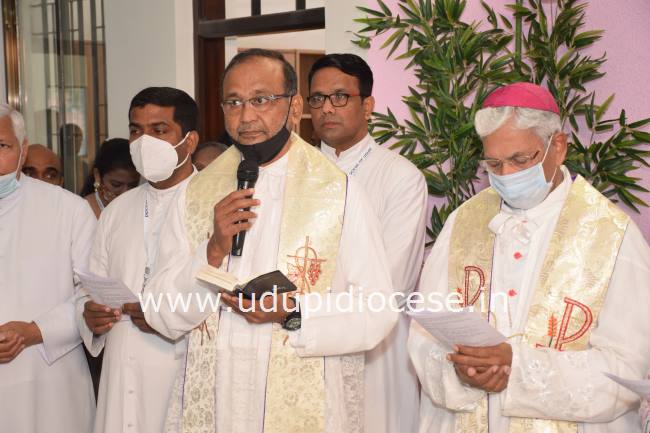 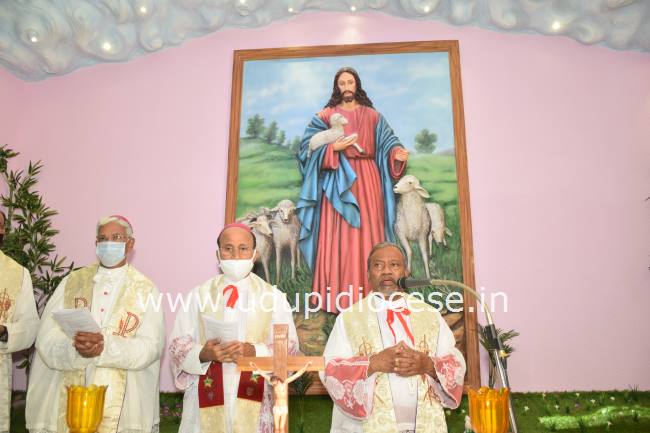 Following the inauguration and blessing of the Pastoral Centre, Archbishop Peter Machado presided over the stage programme. 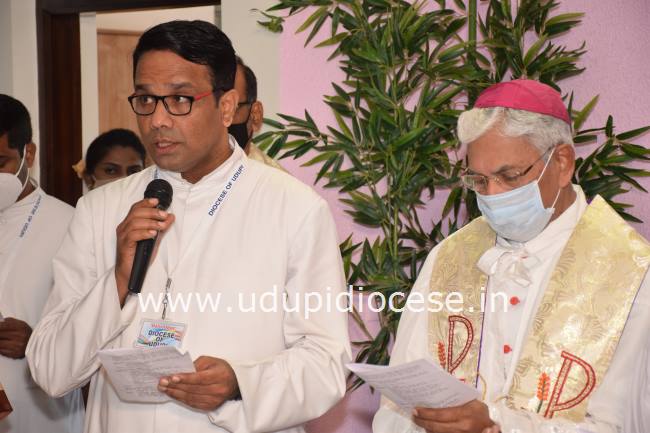 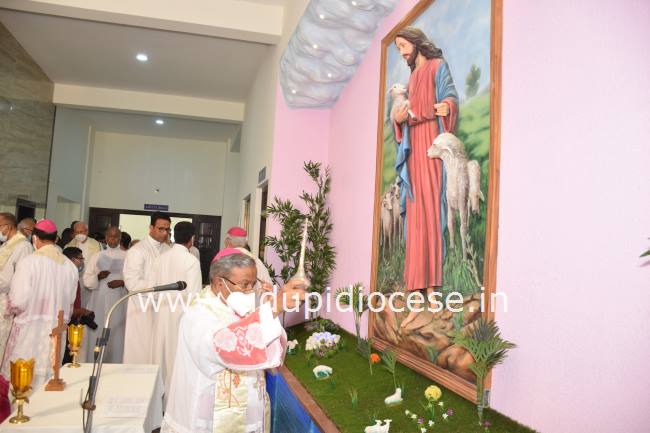 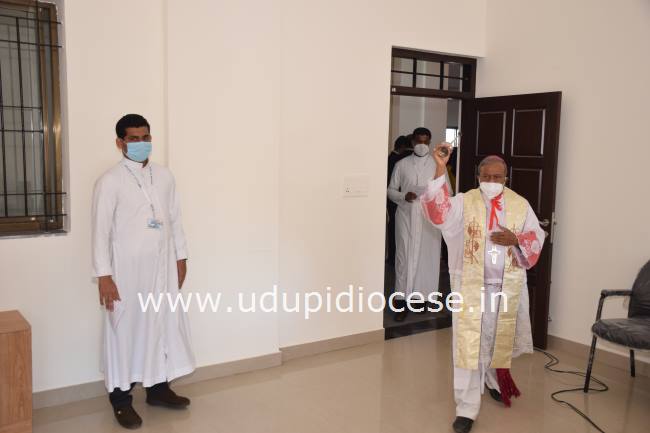 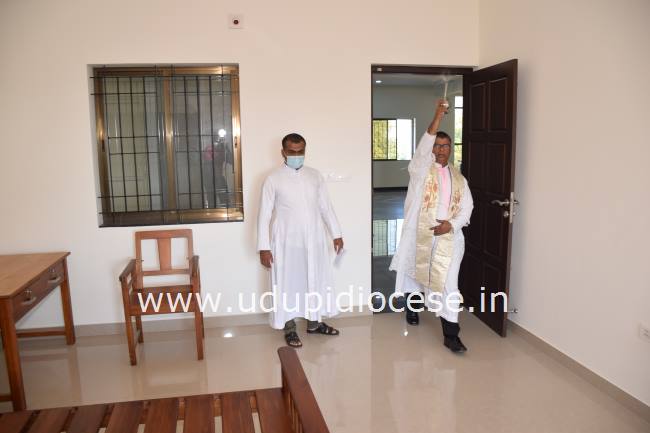 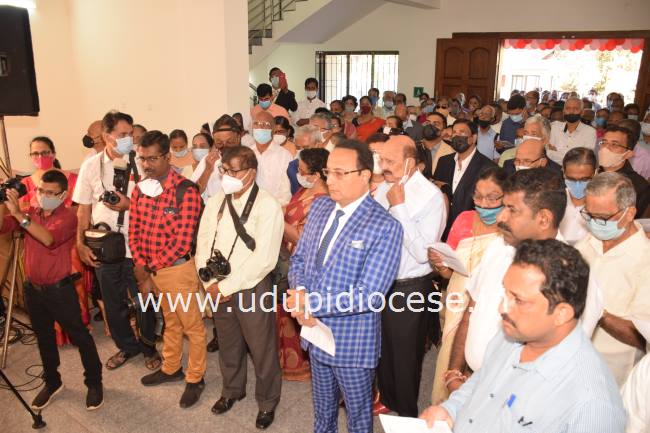 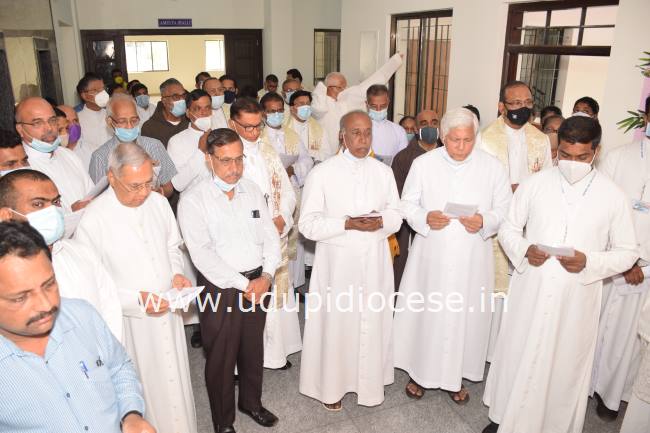 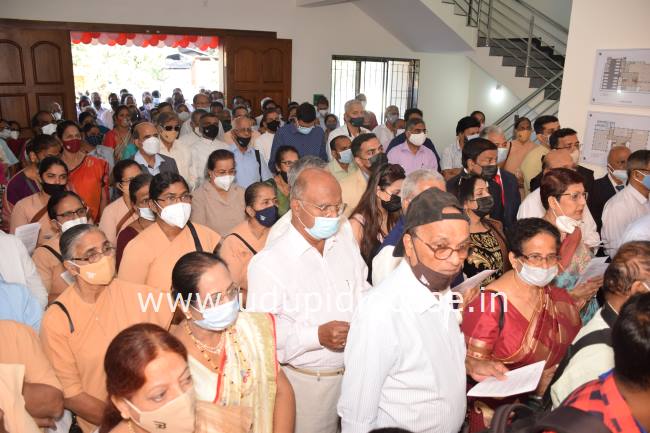 Former Archbishop of Bhopal Dr Leo Cornelio in his message said that the Pastoral Centre ‘Anugraha’ is a divine gift to the people of Santhekatte, Kallianpur. It is a matter of pride that Kakkunje Ward will be known worldwide as the place where the beautiful Pastoral Centre of the Udupi Diocese is located. The Udupi Diocese has been doing excellent progress for the last ten years. He hoped that due to the selfless contribution of the Bishop, priests, religious men and women as well as the people, the diocese would be able to achieve greater success and progress in the coming years.

Speaking on the occasion, former MLA of Kaup Constituency and former minister, Vinay Kumar Sorake said that the longstanding dream of the Bishop of the Udupi Diocese has been realized with the inauguration and blessing of the Pastoral Centre. The service of the Christian community in the field of education is praiseworthy, the organization has greatly impacted the lives of millions of young people, forming them, to be honest citizens of the country.

Besides the educational institutions, they have been serving society through their service-based healthcare system. These are the service-oriented living examples of the Christian community. No one can ignore the twenty percent contribution to the nation by the two per cent Christian population.

In his address, Bishop Gerald Isaac Lobo said that the newly inaugurated and blessed ‘Anugraha’ Pastoral Centre would be a centre of all-around activities of the Udupi Diocese. He further said that in spite of various ups and downs during the last four years of its construction, the dream project of the Udupi Diocese is being realized and he thanked all those who made it possible.

In his presidential message, Archbishop Peter Machado said that he felt extremely happy to be a part of the inauguration and blessing of the Pastoral Centre. He further said that out of 14 dioceses in the state, Udupi Diocese has emerged as a model diocese not only in Karnataka but in the entire country due to its excellent service to the community and society at large. He appreciated the contribution of Bishop Gerald Isaac Lobo to the overall progress of the diocese during the last ten years. Archbishop Peter Machado, continuing said that through his foresight and deep thinking, Bishop Gerald Isaac Lobo was instrumental in erecting such a beautiful Pastoral Centre. His contribution to spiritual as well as social progress in the diocese has been an example for others to follow.

On this occasion, the donor of the land to build the Pastoral Centre, financial donors, architects, engineers and contractors were appropriately honoured. Fr Denis D’Sa, Fr Anil Prakash Castelino and Fr Stephen D’Souza introduced the receivers of the felicitation. On behalf of the diocese Bishop Gerald Isaac Lobo was felicitated by Leslie Arouza, Secretary of the Diocesan Pastoral Council and former secretary Alphonse D’Costa.

Fr Romeo Lewis, Estate Manager of the Udupi Diocese briefed on the background of the construction of the Pastoral Centre. Fr Stany Lobo-Chancellor of the Udupi Diocese welcomed the gathering, Fr Royson Fernandes-Editor of the diocesan fortnightly ‘Uzvaad’ delivered the vote of thanks. Leslie Arouza-the secretary of the Diocesan Pastoral Committee compered the programme.