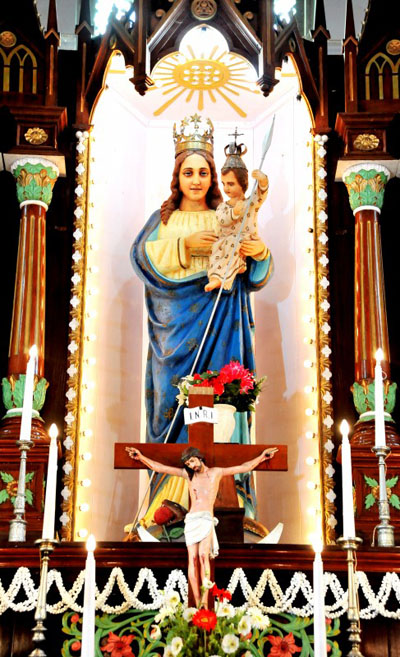 OUR PATRON: OUR LADY OF MIRACLES

The Church of Nossa Senhora de Milagres now popularly called the Milagres Church, Kallianpur was built about the same time as the Church of the same name in Mangalore. It was founded in the year 1678 after the treaty between the Portuguese and Queen Chennamma relict of Soma Shekara I of Bendore who ruled Kanara from 1671 to 1697. The Portuguese were allowed to build churches and factories in Mirjan, Chandavar, Honnawar, Bhatkal and Kallianpur. The Church was also granted Inam lands. The Christians here were emigrants from Goa from who came seeking fresh fields and pastures new because of Insecurity and economic reasons. Goa suffered from famines in the years 1553, 1570 and 1582 with seasons of great scarcity. In 1570 Goa was besieged by Adil Shah to expel the Portuguese from India. Later, there were the Mahratta attacks in Goa in 1683. The inquisition in Goa also sent away some of the Christians adhering to Hindu practices. The Christians were lured by promise of land and subsidy because of their industry and improved knowledge of cultivation.

It was for this community that the Portuguese Hierarchy of Goa planted the Church in 1678 in Kallianpur under the title of Nossa Senhora de Milagres, Kallianpur.Our Lady of Miracles is the Woman of the the revelations of St. John, “And a great portent appeared in heaven, a Women clothed with the sun with the moon under Her feet and on her head a crown of twelve stars”.

This great portent appeared for Kallianpurians with the enthronement of Our Lady of Miracles in the Church at Kallianpur. On the great artistic Portuguese Altar of the former church from where she reigned, she was greeted with the words, ‘ Tota Pulchara es, O Maria : Et Macula Originalis Non esr in te”, by two cherubims carrying an artistic ribbon as if waving in the air. From this throne her domain extended over all the region covered by the basins of three rivers : The Sita Nadi, The Swarna Nadi and The Udyavara river. It compromised all the land in the West till the Arabian Sea; In the North West and the North extending six miles to Sasthan, Barkur and the beyond; in the North East to Pethri, Giri and Perampally ; in the South to Udyavar, Udupi and Malpe including Thottam and the Mount Rosary church. The History of the Milagres Church, Kallianpur is the history of the Milagres Church Kallianpur is the history of the present varado of Kallianpur and even beyond, foe until recent times, Milagres Kallianpur headed the Northern Varado of the former two varados of Kundapur, Kallianpur, Shirva and Karkala.

Christianity prospered and gained security and respect for a century in Kallianpur as in the rest of Kanara. There was a Chapel in Barkur served from Kallianpur until it was constituted into a Parish in 1863. There was also a Church dedicated to St Peter with a sizable Catholic Community at Petre Pally. There were candidates for Priesthood studying in Goa. In 1769 one Joachim Jose Luis, son of Philp Luis and Rosa Furtado of Baikady village of the Parish was ordained priest by Archbishop Nivev Brum on 23rd September after studies in Rachol Seminary. He later served in Kanara and at Bajpe. Then all of sudden persecution came. Tippu Sulthan of Mysore, With whom the English were having wars suspected that the Christians were attached to them and were helping the Christian English. When on 30th January 1784 the English lost the war with him at Bendore and surrendered to Tippu’s forces, he gave secret orders to his Commanders to seize all Christians in Kanara and take them captive to Shrirangapatam. It was lightening strike when in the fateful night of Ash Wednesday. On 24th February 1784, Tippu’s soldiers carried out the secret orders and entered every Christian settlement simultaneously throughout Kanara. Complete families with children in arms were brutally herded and marched captive across the Western Ghats. Only a few people managed to escape or stay. The Christians from these parts were first camped in Nagra and later taken to Shrirangapatam. The Church here was destroyed and also the churches at Barkur and Petre. All along the way and in the transit camps, many died of malnutrition, fatigue, ill-treatment and diseases. Some escaped into the jungles along the route and from thence to Goa during the long hauls. When at Shrirangapatam prison, small pox raged and supervision was lax, some escaped to Malabar. The prisoners at Shrirangapatam were forced to accept Islam and circumcised . There were many who resisted and died.

With the defeat of Tippu in 1799, the survivors and the escapees to Goa and Malabar trekked back gradually. They found that their lands which were better cultivated than others were confiscated and sold away for high prices and had changed many hands. They had to start afresh from scratch.

The Church in Kallianpur was rebuilt in 1806 by the contributions of the people, by Fr. Joachim Jose Britto of Cortalim, Goa and completed in 1808. Very soon the Catholic Community had pulled up from its trails and was emerging into better times though they had lost everything and the English Government could hardly help to recover their lost lands. The Parochial House was rebuilt in 1875 by the last Goan Vicar Rev. Fr. David Pereira. The Parish school existing at that time was demolished and classes were conducted somewhere else.

In 1839, Pope Gregory XVI issued the Bull, ‘ Multa Praeclare’. By this document the spirituality jurisdiction of the Arch – Diocese of Goa over Kanara was transferred to the Propaganda Mission of the Vicar Apostolic of Veraploy. At that time a great majority of the parishioners of the Milagres Church preferred the jurisdiction of the Padroado of Goa along with its Goan Vicar. There was also a small selection of disgruntled parishioners who had developed connections with the Verapoly Mission who chose to be under the latter jurisdiction. This group of parishioners built a separate church namely Rosary Church. It was housed in thatched shed of the present Board Higher Elementary School. It was later shifted and rebuilt about half a mile away from Nejar Hill in 1882, and was called Mount Rosary Church. The Udupi Parish was formed later from this and the Udyavar parish in 1890.

The Catholic Community of Udyavar was served from Milagres Church. In 1863 the Udyavar Parish was constituted with a resident parish priest by the Padroado jurisdiction.

Then came a calamity for Milagres, a lamentable period of darkness. In 1885 Pope Leo XIII established the Hierarchy of India by his Apostolic Letter: “Humane Salutis auctor”. The double jurisdiction of the Padroado and the Propaganda Mission came to an end in South Kanara after signing of the Concordat of 1886 between the Holy See and the Portugal by which eleven parishes of Delegate in Bangalore Msgr. Aligardi issued the order from Bangalore in 1887 declaring the Padroado jurisdiction of Goa was extant in South Kanara. The order was published by the Vicar Apostolic of Mangalore who had now become the Bishop of Mangalore.

After the promulgation of the Bull “Multa Praeclare” in 1839, there was maneuvering and behind the scenes struggle for promoting the cause of both the Padroado and the Propaganda jurisdictions from both sides. The Portuguese power in India had declined and they were trying to preserve their influence: consequently a great majority of the parishioners of Milagres because of their long association with the ministry of Goan priest who gave them guidance over the centuries again preferred to be under the Padroado hoping that they would accommodate as previously. But when the Goan priests suddenly withdrew and left to Goa in compliance with the order they were left without right leadership or guidance. They appealed to the Holy See to remain under the Padroado. There was a dispute over the temporalities of the Church, to persue the status quo, when the priest of the Propaganda Mission arrived. It was insubordination but no ideology or doctrine was involved or in question until this moment. In the litigation that followed they lost their suit in court against the Propaganda mission. Following this, the dissidents built a church of their own dedicated to our Lady of Miracles at Bramhavar. They unfortunately took the guidance of a suspended priest of the Arch Diocese of Goa. Father Zephrin Noronha by name. Sometime afterwards, they associated with the Jacobite Bishop Mar Julius II of Goa, India and Ceylon, who was formerly a Catholic priest by name Fr Anthony Alvares. He was earlier banned for defusing the Ecclesiastical Authorities in Goa. With this, the Schism became a fact. The situation called for tactful handling with understanding and care.

The first Vicar of Milagres under Propaganda Mission after the goan priests left, was Very Rev. Fr Albert D’Souza in 1887. Prior to this he was the Vicar of the Mount Rosary Church, Kallianpur. He was popular as a great preacher and being already familiar with the people was liked by all. After the first period of heat, recriminations and confusion of the feud subsided, in the second thoughts a great number of discerning and enlightened dissidents from all over came back to the Mother Church. It was evident therefore, that the dispute was not on the jurisdiction of the Pope over the parishioners but purely a wish to be under the Padroado on sentimental or emotional basis. Only those leaders who in the passions aroused at that time became prejudiced and estranged during the long litigation and those not so enlightened remained behind. The urgent and priority work of Fr. Albert D’Souza who had a long innings was to win back the lost sheep which he ably did with patience and perseverance.